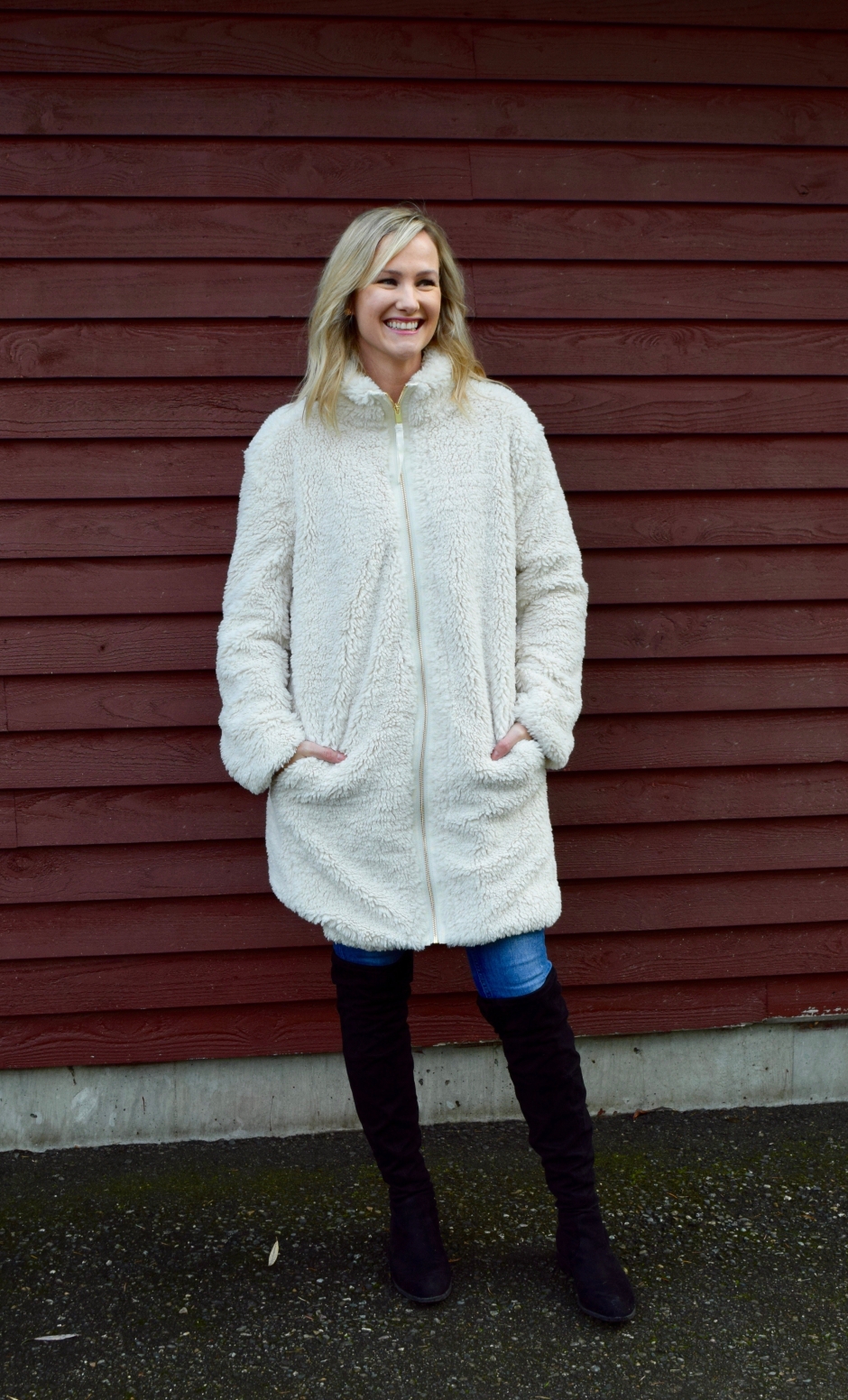 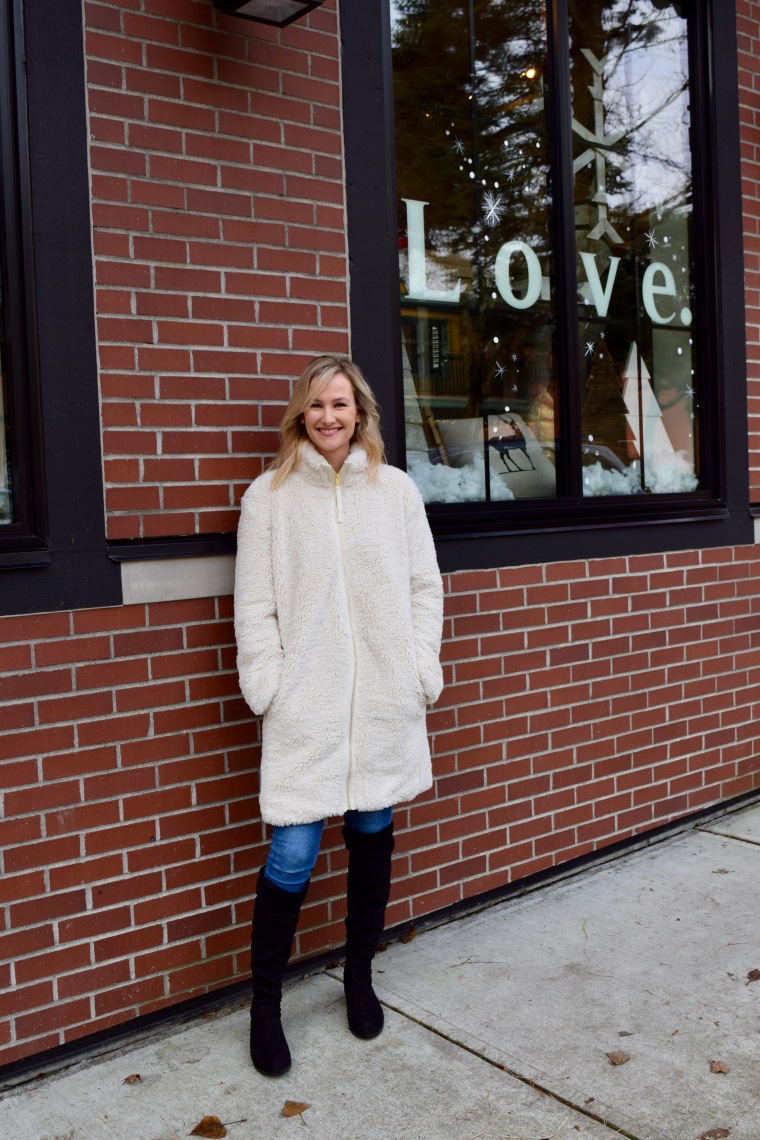 I am sure that I’m not alone in my love for cozy coats.  This year, I have been seeing the cutest Teddy Bear coats and fun faux fur jackets!  What a perfect solution for staying warm as the temperature drops, while still looking stylish 🙂  Coats this year are a real statement piece.  Be bold and step a little out of your comfort zone.  I was a bit hesitant about my cream sherpa coat when I first saw it, but decided to give it a try.  I am absolutely in love and have gotten more compliments than any coat I have owned before!

I have rounded up a bunch of cute, chic and cuddly coats if this is a look that you are loving too!

Do you have a favourite? I would love to chat in the comments below 🙂

I have to confess, I have been slow to get on board with the velvet trend.  In fact, I flat-out ignored it last year and secretly hoped it would go away… lol!  I don’t know what it is about this Fall, but I am finding myself totally drawn to it now.  Do I dare say I’m “crushing” on velvet?!? (Ha ha, see what I did there?)  My first velvet purchase this year was a simple black dress to subtly try out the trend.  I am completely hooked… I love it all now!  Velvet booties, clutches and all of the beautiful colours and styles it is available in!  I just even recently purchased my six-year-old the cutest little velvet dress to match me… lol! 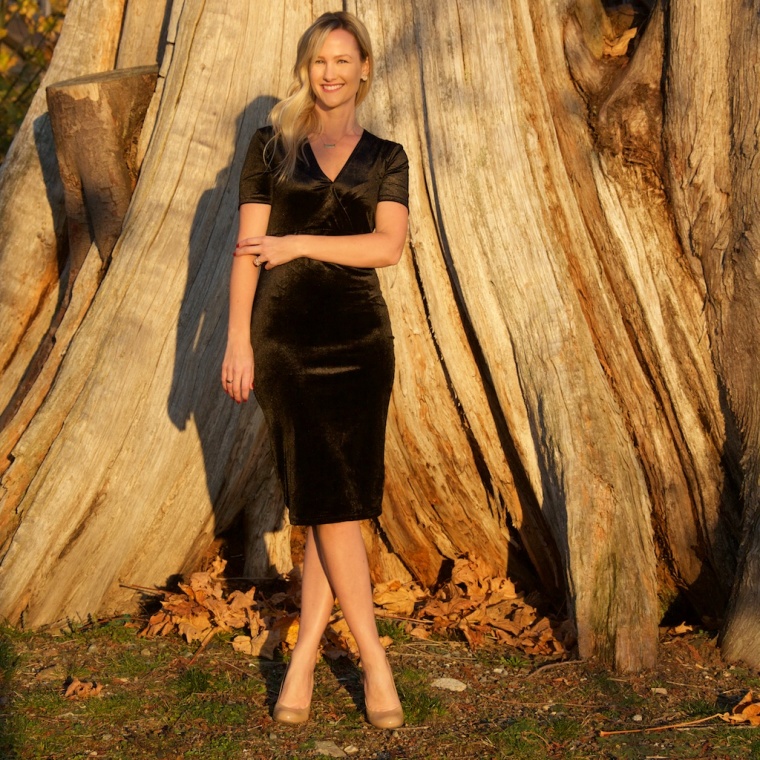 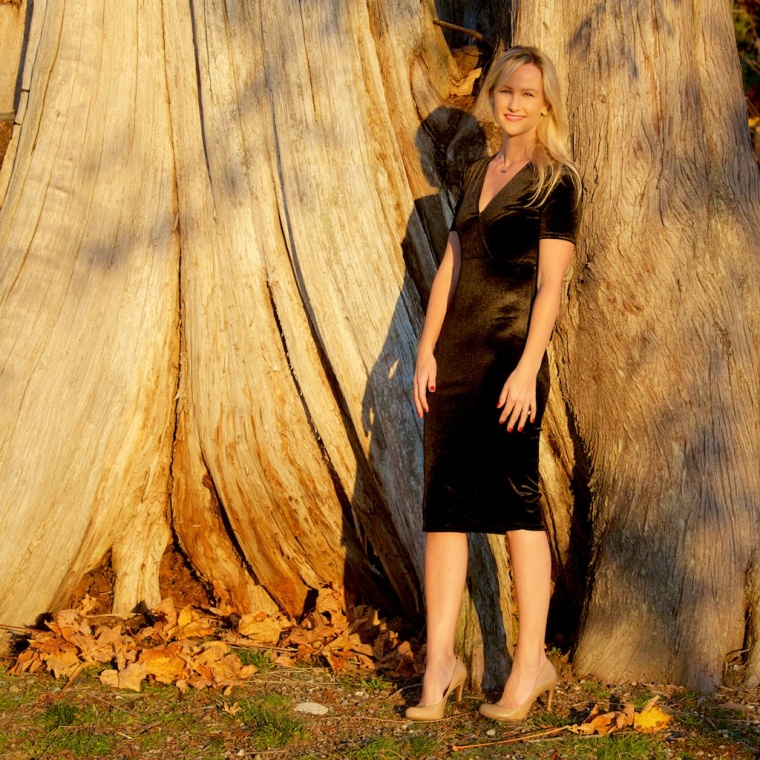 I have rounded up a few more reasonably priced velvet articles if it is a trend you are loving too!

What are your thoughts on seeing velvet everywhere? I would love to chat in the comments below 🙂 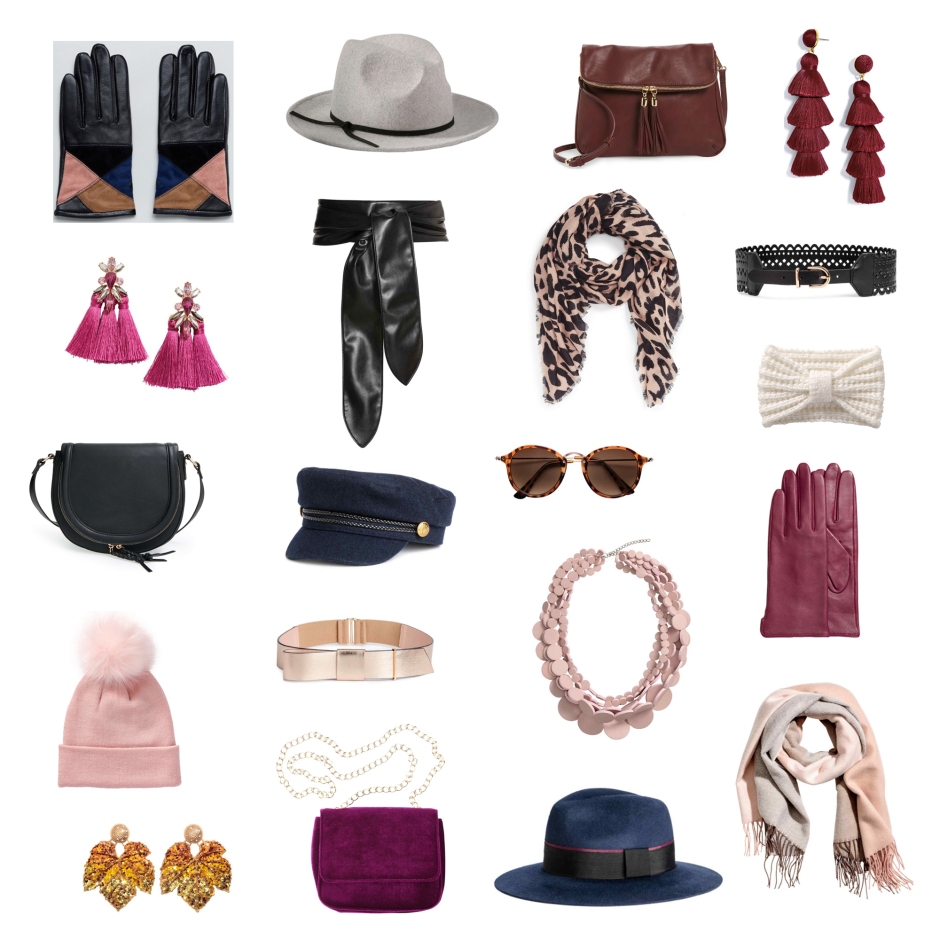 As the saying goes, accessories are necessities!  A beautiful accessory can literally make your entire outfit.  I totally appreciate pieces like a simple black saddle bag or a classic plaid scarf, but during this season there is a ton of room for being as bold as you want to!  Hats are huge for Fall 2017…  and not just the cute felt floppy hats like we have seen the last couple years, but also baker boy hats (my new obsession!) chic berets, pom-pom toques, page boys, felt fedoras in every colour and embellished headbands.  There are an abundance of fun Fall accessories to make a statement with.  Tons of vibrant colours, patterns and various textures.  I know it’s easy to stick to neutrals, but this year with your classic black coat why not try a pair of vibrant burgundy leather gloves or a leopard print scarf instead?  I am also a huge believer in belts.  They can often add a fun element to an understated outfit!  You will be seeing a ton of oversized buckles and thick, corset style belts this Fall.  Be bold and be confident with your accessories and you will be amazed at how many compliments you will get 🙂

I have linked a bunch of fabulous and really reasonably priced Fall accessories below: 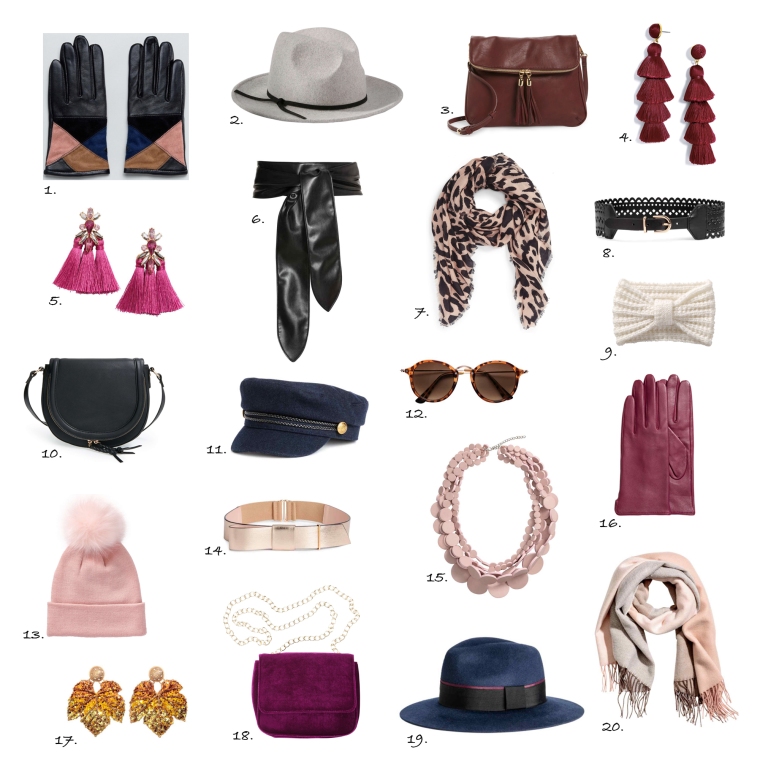 What are your favourite accessories for this Fall? I would love to hear from you in the comments below 🙂

I am really loving ponchos (also referred to as capes or wraps) for Fall!  Such a fun and cozy alternative to simply throwing on a sweater.  They give you that layer of extra warmth, while still looking very chic!  These wraps can have a bit of a vintage or rustic feel to them which I love!  Ponchos are super easy to style and you can wear them over practically anything: jeans, leggings, dresses.  If this is a new trend to you, grab one in a neutral colour that goes with everything.  You will be surprised by how much use you will actually get out of it 🙂  I get more compliments whenever I wear this plaid one below.

My exact plaid poncho is from last Fall but I have found a bunch of other really cute, reasonably priced ones if it a look you are interested in trying this look: 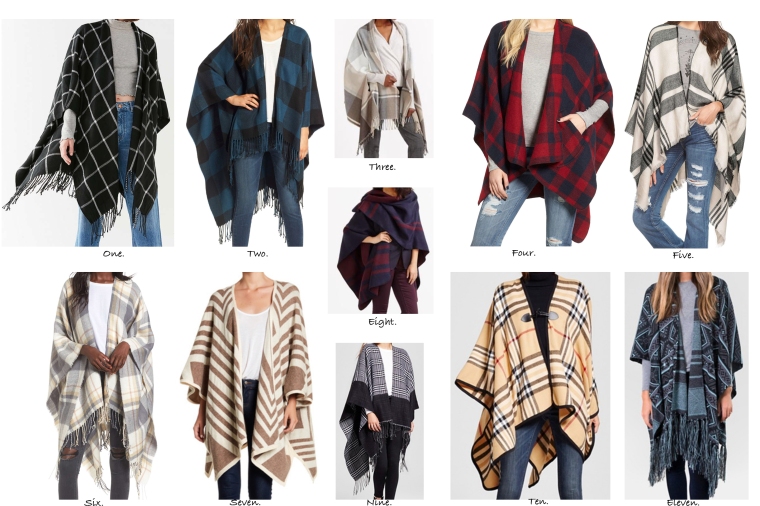 It is no secret that I love midi length everything!  I find it to be such a flattering and functional length for clothing.  The midi coat was popular last Fall but I feel like is going to be much more mainstream this year.  This length of coat falls just below your knees, basically mid calf, which makes sense as to why it’s called midi length.  I find it has almost a bit of a retro feel and can easily be dressed up or down.  I tend to wear a lot of tunics and long sweaters in the fall, so I like this length of jacket because then my clothing isn’t hanging out the bottom of my coat (and it keeps your bottom warm in the chilly months.. lol!)

I have rounded up a bunch of fun, reasonably priced midi length jackets if you were looking to add one to your Fall wardrobe: 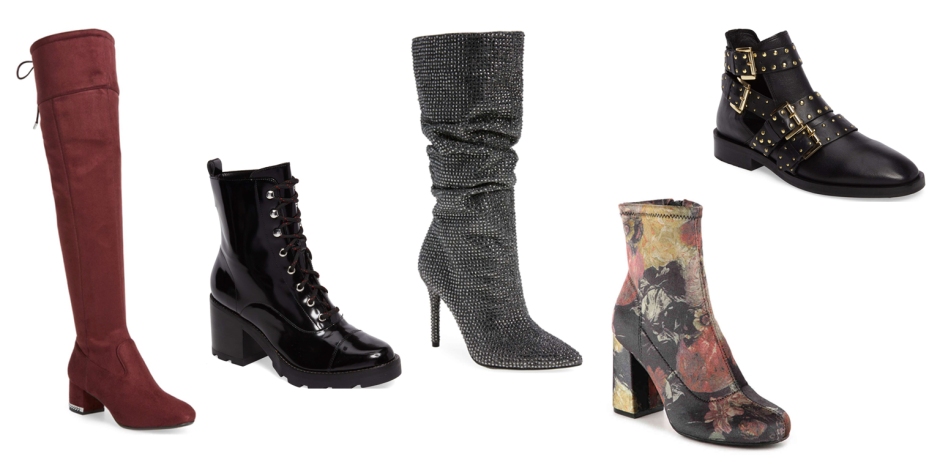 It goes without saying that one of my favourite parts of Fall is the fashion.  I love cozy cardigans and sweaters over leggings or distressed denim with a fun scarf and a great pair of boots.  Fabulous boots can make your entire outfit.  In fact, I sometimes outfit plan around my footwear… lol!  There are no shortage of amazing boots right now and it can be a little overwhelming if you are shoe obsessed like myself!  I have managed to narrow it down to five styles I feel you are going to be seeing a ton of this Fall:

Over the Knee Boots

I purchased a couple great pairs of OTK boots last year so I am thrilled to see they are still everywhere again this year!  This style of boot has been updated so it is a little less Pretty Woman and much more elegant and chic now!  So many different heel heights and fabrics to choose from to keep your look casual or to dress it up.

The chunky block heel and platform on some of these combat style of boots give them a bit of a dressier look.  These boots are super cute and definitely have a bit of edginess to them.  I personally think it would be fun to pair this more utility style of footwear with something super feminine! 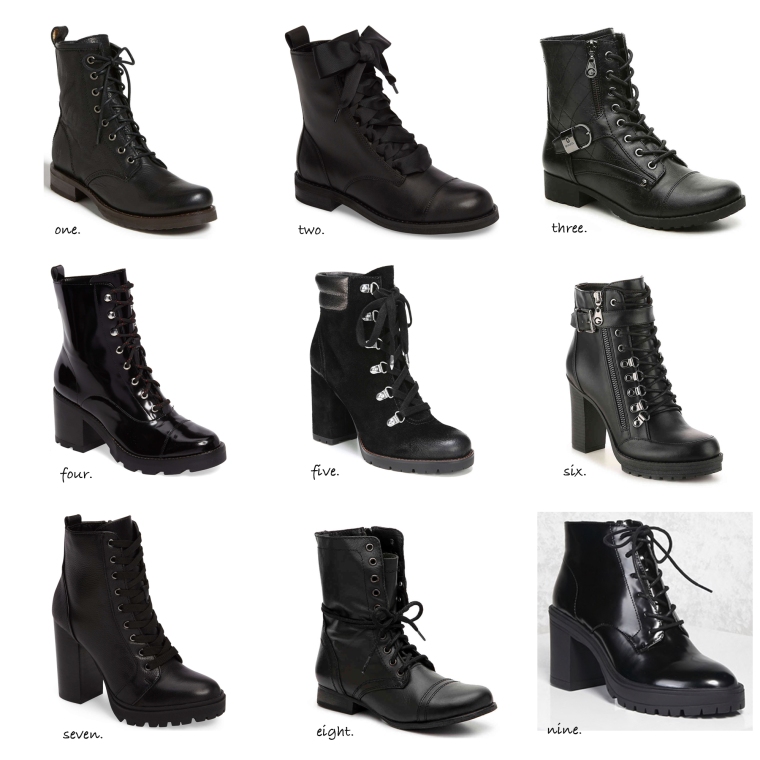 I love the details on these moto inspired booties!  The low heel makes them really easy to wear and the studding and buckles add a really fun element to the otherwise plain black.  They would look super cute with jeans or a little leather skirt!

Keeping with the flowered embroidery trend that was everywhere this year, floral has continued into Fall footwear.  There are so many adorable embroidered or floral booties for sale right now.  Definitely a statement piece and I absolutely love them!  I do not own a pair yet, but will definitely be putting them at the top of my wish list! 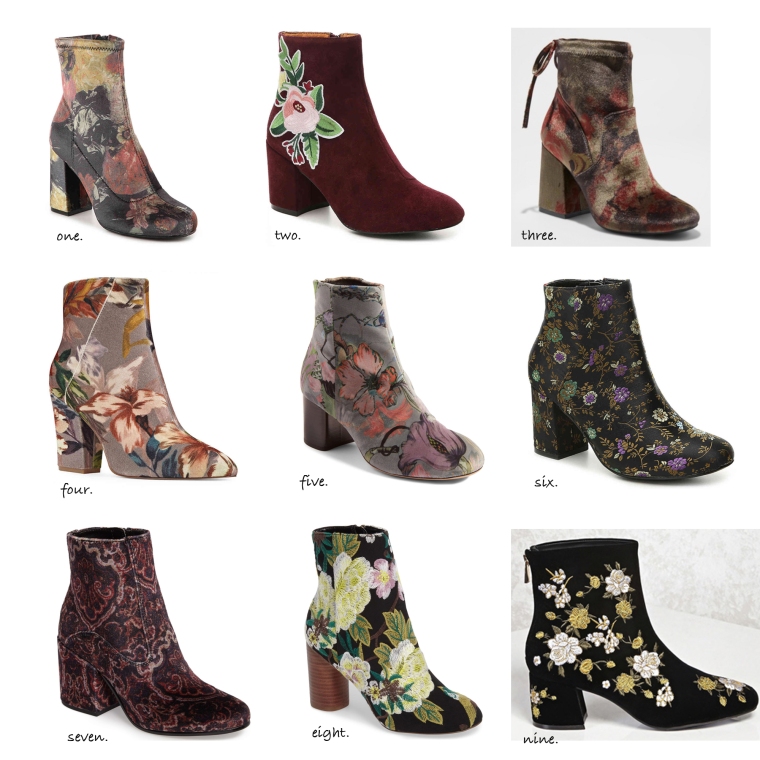 80’s and 90’s Fashion has been making a huge comeback for the last couple years so it was only a matter of time until slouch boots showed up again! (I used to own the sweetest pair of white leather one in school… lol!)  The boots I have been noticing this year have a more subtle slouch then the ones that I once wore though! 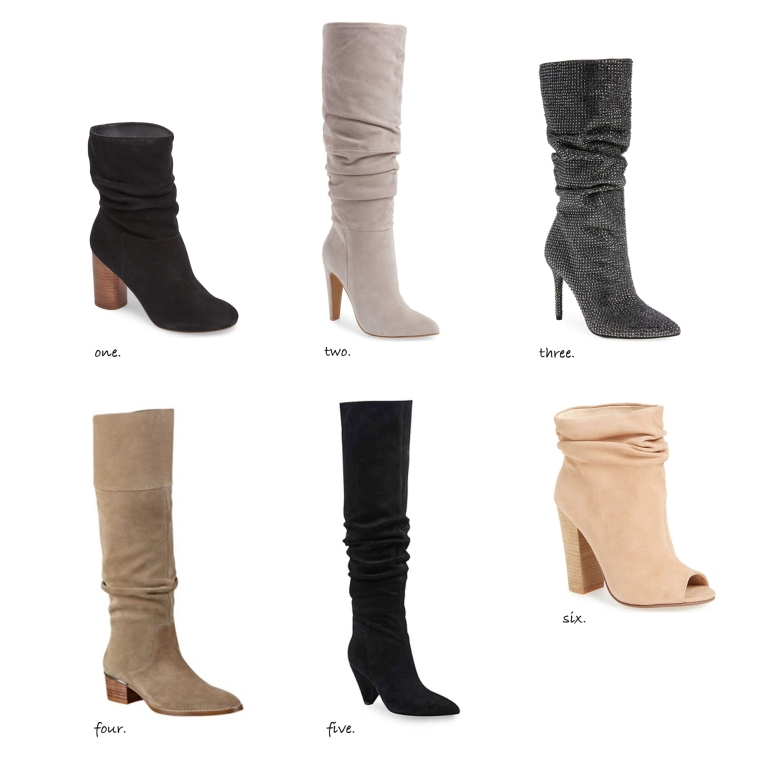 What do you think of these different boot styles for Fall 2017?  I cannot wait to try them out 🙂

Happy Friday everyone!  This is the fifth and last day of my week long posts on the Pantone Fashion Colour predictions for Fall 2017.  I hope that you enjoyed reading them as much as I enjoyed researching and writing them!  Monday I shared my finds for Grenadine and Tawny Port, Tuesday was Ballet Slipper and Butterum, Wednesday featured Navy Peony and Neutral Gray and Thursday  I looked at Shaded Spruce and Lime.  Today I will explore the last two shades: Marina and Autumn Maple.

Cool with an enhanced vitality, Marina is the only truly cool color in the fall palette that brings with it freshness and brightness.  (Description courtesy of the Pantone website.) 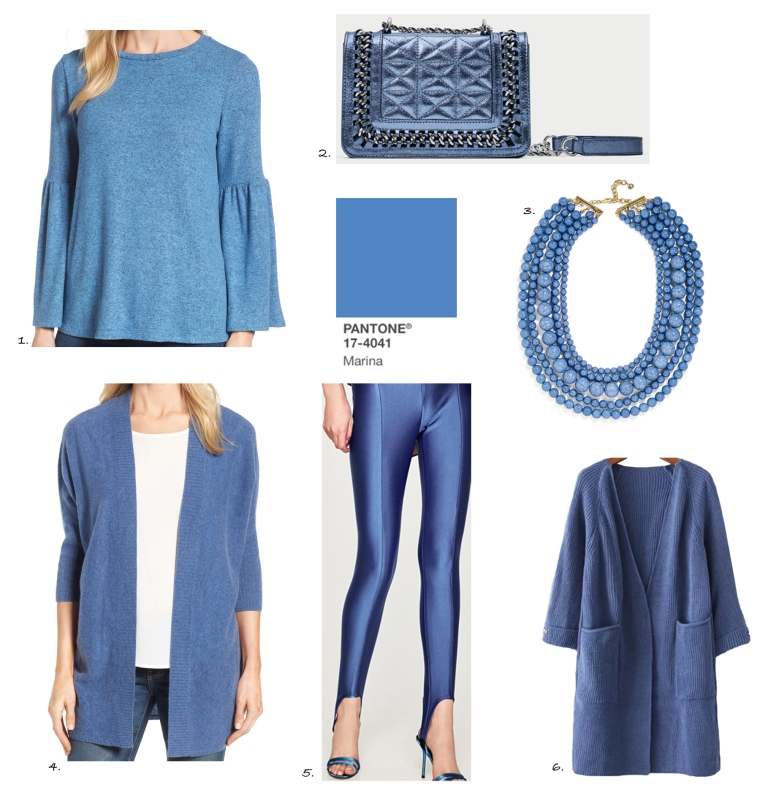 A quintessential autumn color, Autumn Maple is tawny and russet, introducing warmth into the palette.  (Description courtesy of the Pantone website.) 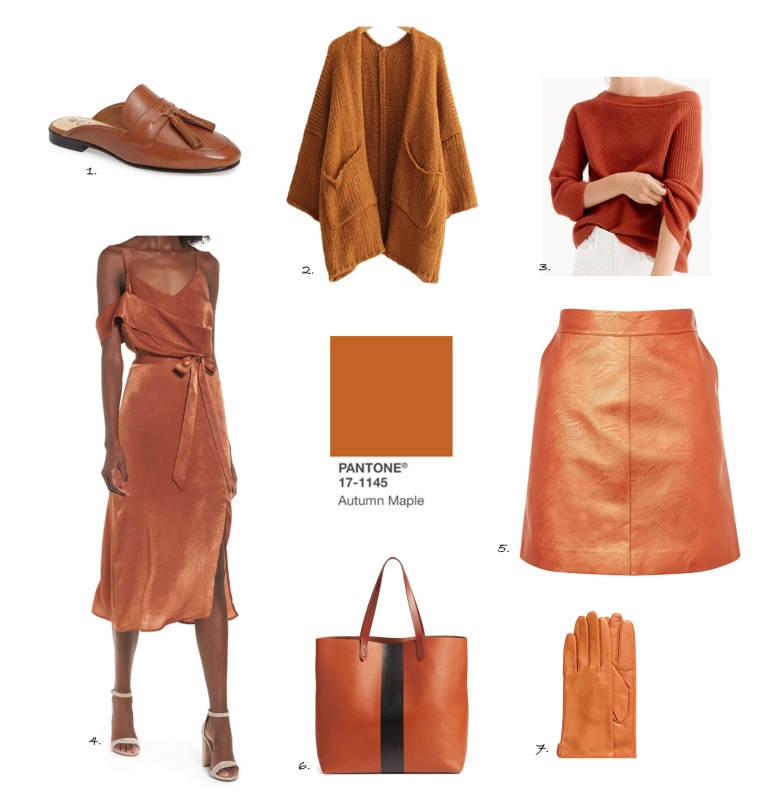 What do you think of the ten forecasted colours?  I personally think that they are beautiful!  I am excited to see that quite a bit of bright colour will be continuing into Fall 2017.  I always hate the end of summer, but building my wardrobe for the upcoming season eases the pain a bit… lol.

This is the fourth day of my segment on the Pantone colour predictions for Fall 2017.  Monday I shared my finds for Grenadine and Tawny Port, Tuesday was Ballet Slipper and Butterum and Wednesday featured Navy Peony and Neutral Gray.  Today I will be talking about Shaded Spruce and Golden Lime:

This is a green you might see in the forest – sheltering and protective as evergreen trees. (Description courtesy of the Pantone website.)

Earthy tones with a twist, the golden undertones of Golden Lime makes this yellow-green shade a refreshing complement to fall classics.  (Description courtesy of the Pantone website.)

Tomorrow I will be sharing the last two forecasted colours in the Fall lineup: Marina and Autumn Maple. 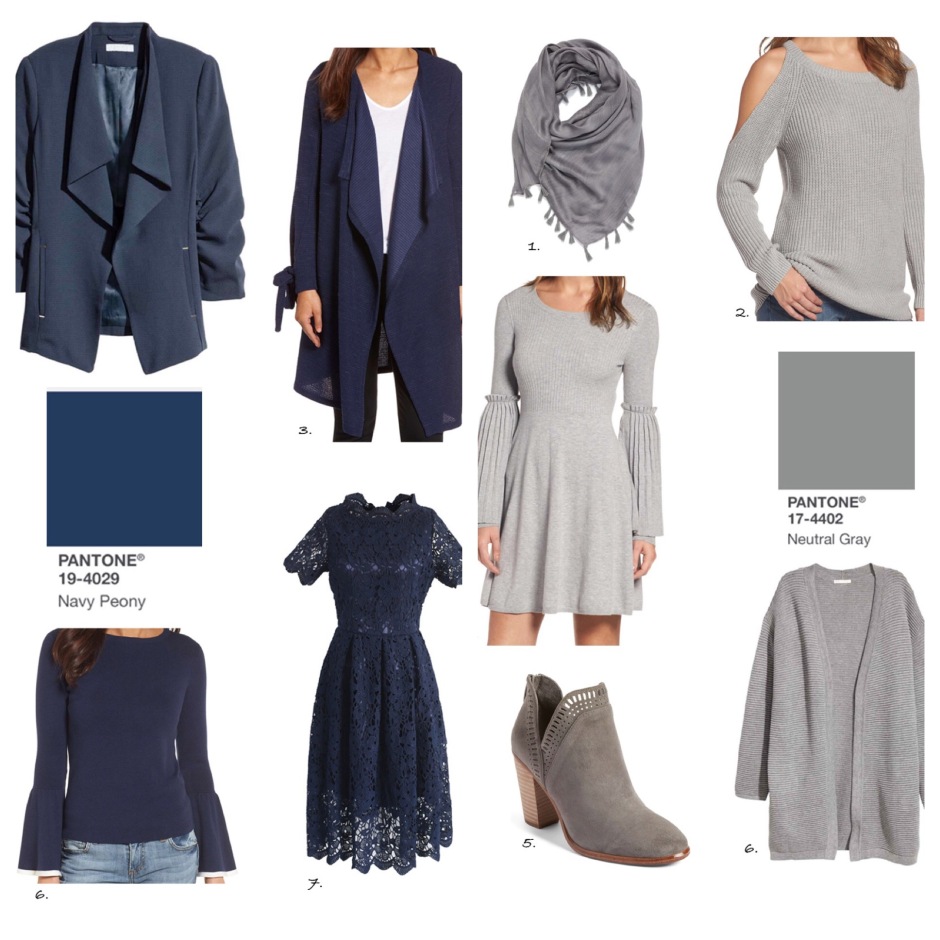 On Monday I started my segment on the Pantone Colour predictions for Fall 2017.  I touched on four of the forecasted colours so far: Grenadine, Tawny Port, Ballet Slipper and Butterum.  Today I am talking about Navy Peony and Neutral Gray.  These two colours are guaranteed to be in my personal clothing lineup for this fall!

A mainstay for the season for both palettes, Navy Peony is a dependable and an anchoring shade. Solid and stable, the hue takes some of the load off of black as a go-to neutral. (Description courtesy of the Pantone website.)

The standard bearer of all neutrals, Neutral Gray shares the anchoring role with Navy Peony in this palette. It can be used as an accent or a head-to-toe statement shade. (Description courtesy of the Pantone website.)

See you tomorrow for Shaded Spruce and Golden Lime!

Looking back I have been fascinated by fashion as long as I can remember.  When I was a teenager, I used to buy embroidery thread and stitch flowers onto the back pockets of my jeans or the collar of a shirt.  I guess I just liked to fancy it up a bit… I always thought it looked so cute!  Too bad I didn’t hold onto my customized garments because my friends, embroidery is back big time!  I guess it was only matter of time because floral prints are always so popular.  What could be sweeter then a tiny patch of flowers embroidered onto a breezy sundress? Well look no farther because I have rounded up a bunch of adorable embroidered items for you to choose from! As cute as I thought my homemade jeans were, the Zara ones that I have found below could probably fill the void… ;))

What do you think? Are you loving this trend as much as I am?